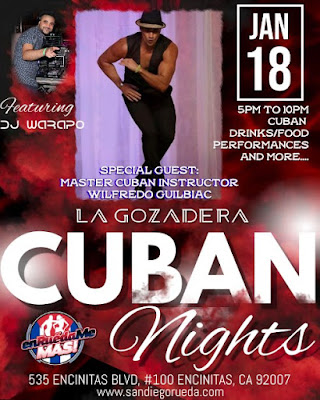 San Diego's Cuban Salsa Night is back and ready for 2020!

In just two weeks we will be celebrating birthdays and dancing A LO CUBANO! Don't miss the north county party of the month that's sure to cure your casino fix.

DJ Warapo from LA will be spinning the latest in Cuban music with some good ol’ classics. Warapo has DJ from Local events to all over the world including the largest festival in Cuba. It doesn't get any more authentic than that!!!

✨WILFREDO GUILBIAC RODRIGUEZ will be leading a salsa suelta class to get you working on your footwork and mixing rumba with your casino. Next time you let go from your partner when the music breaks you will know exactly what to do after Wilfredo’s class! Don’t miss the opportunity to learn from this Cuban MASTER instructor.

This event is open to all ages, so enjoy dancing with the whole family just like in the streets of Cuba. Students get in for free before 6pm with student ID.

Enjoy delicious Cuban cuisine and of course, Cuban Drinks that will be available for purchase, don’t miss a true Cuban experience.

HAPPY NEW YEAR! Looking forward to kicking off 2020 with you dancing to CUBAN SON, SALSA, TIMBA, REGGAETÓN at CURUYE's JANUARY CUBAN SALSA TIMBA DANCE PARTY at The Granada! DEEJAY WARAPO, the Music Master of the evening, will be dropping the hottest Cuban dance beats, past & present! 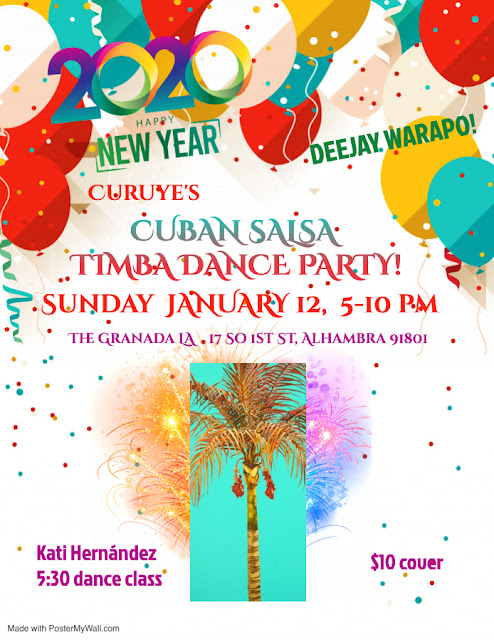 WEAR WHITE TO REFLECT LIGHT INTO THE NEW YEAR!

Cuban dancer  KATI HERNÁNDEZ will be teaching a dance class at 5:30 PM, so come early to warm up! So far we have MARCELA LEYTON, JUDITH DAVIES, MICHELLE GREEN, SHAUNA REED, MARK SHAW, SHERMAN SMITH, NICAN ROBINSON looking forward to dancing the birthday dance and sharing some cake with you! (If you'd like to celebrate your January birthday, message Curuye by January 10!)

The Granada serves up a variety of tasty dishes throughout the night: from salads, to sandwiches, to full entrées, so share a meal with your friends!

Free parking in the structure across the street from the Granada.

ISSAC DELGADO from CUBA in L.A.!

So lucky to have ISSAC DELGADO & his band, direct from CUBA, performing in L.A.! LET's PROVE THAT SO CAL LOVES CUBAN MUSIC! And what better way to celebrate DEEJAY WARAPO's birthday?! SEE YOU THERE! 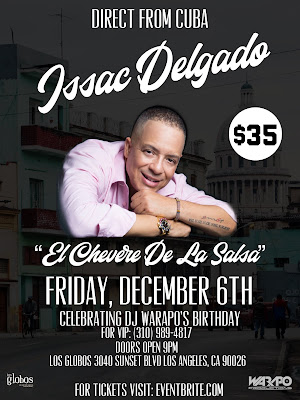 At CURUYE's DECEMBER CUBAN SALSA TIMBA DANCE PARTY we'll be celebrating not only the holiday season, but also CHANGÓ, powerful deity of of the drum, dancer par excelllence, and warrior from Cuba's Yoruba tradition whose day is celebrated this week! Welcome DJ BYRON,  guest music man of the evening! He has the CUBAN SALSA! TIMBA! REGGAETÓN! to keep us grooving all night! 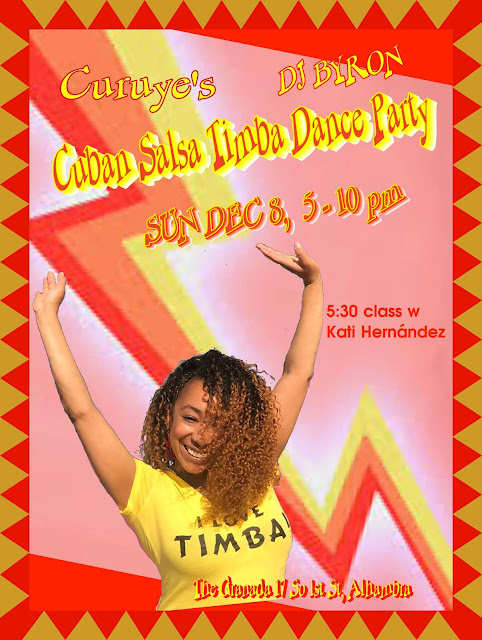 KATI HERNÁNDEZ will be leading an AFRO TIMBA class, showing how Cubans give flavor to their CASINO (CUBAN SALSA) with influences from Afro Cuban dance legacies. You won't want to miss her 5:30 PM class!

We'll be celebrating the December birthdays of CARMEN LUCERO, CHIQUITA FLOWERS, MARLA CHUNG, WILLA STEVENSON ... so far! If you have a December birthday that you'd like to celebrate, please message Curuye! (After his earlier commitment WARAPO hopes to arrive in time to dance the birthday dance too!).

All ages are welcome!

LET's PARTY IT UP ON THE DANCE FLOOR MY FRIENDS! HELP SPREAD THE WORD! 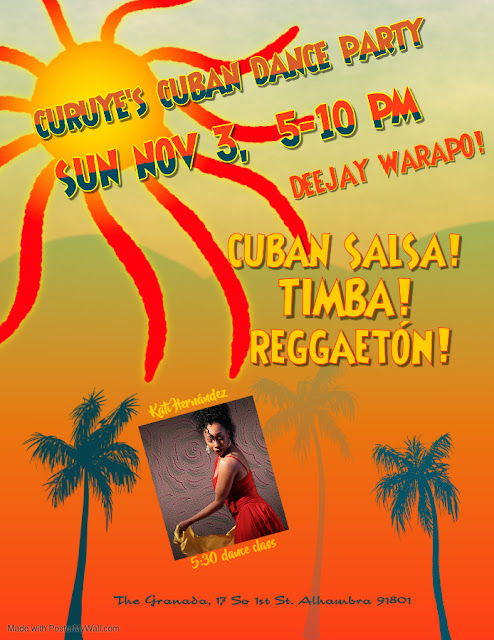 CURUYE's CUBAN DANCE PARTY kicks off it's eleventh year on Sunday, November 3 at The Granada! DEEJAY WARAPO keeps us grooving on the dance floor with the very latest and best CUBAN SALSA! TIMBA! REGGAETÓN!

KATI HERNÁNDEZ will be back to add that 'sabor cubano' to your dance, so come early for her 5:30 PM class.

NOVEMBER BIRTHDAYS GALORE! ELEANOR ESPINEL, GABI TORRES, GLORIA HERRERA, PATTY TOWNSEND, FREDDY CARRILLO, JOSÉ OCHI so far will be dancing the birthday dance at the party! Message Curuye if you have a November birthday so we can put your name on the cake!

The Granada offers hungry dancers a variety of eats: from appetizers, salads, sandwiches to entrées throughout the evening!

Free Parking in the parking structure across from the Granada.

SEE YOU ON THE DANCE FLOOR! 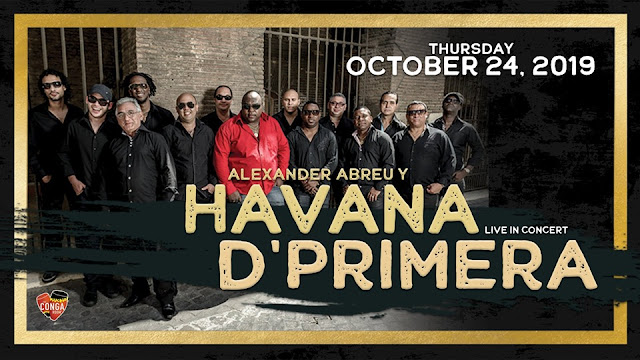 Greetings Casineros & Amigos!
It's caravan time to head up north to Los Angeles and watch one of the best bands in Cuba, Havana 'Primera.

Alexander Abreu y Havana D’ Primera is the Cuban Timba band directed and founded by Alexander Abreu in 2008, widely recognized as one of the greatest trumpet players of his generation - enriching most of the musical productions on the island. The band was formed by a collective of the best musicians and Cuban-All-Stars artists in the current Cuban scenario, including not only revolutionary dominating musicians in the 90’s but also the most talented musicians of the upcoming years.

Por Fin!!
The moment we have been waiting for months. Musica en la Plaza series at the California Center for the Arts Escondido is having a timba band play and it's FREE! This is one of the best opportunities to come together in San Diego to dance Casino, Rueda de Casino, and Cuban Salsa Suelta. Let's get all the Casineros from San Diego and beyond to invade Escondido and get our groove on with this amazing band. I have seen this band play several times, and they are REALLY GOOD! I'll be there to call ruedas and lead some salsa suelta. 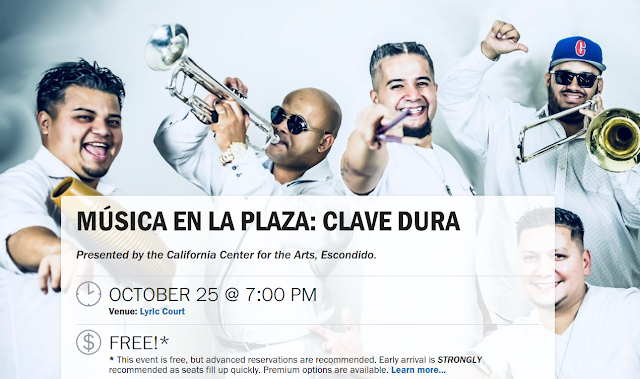